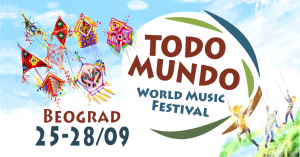 World music, as a unique polygenre that connects the whole world, is a good litmus paper for assessing and considering many topics, from the relations between the North and the South, postcolonialism, Eurocentrism and others. The very term world music provokes controversy among experts, musicians, organizers and journalists. On the one hand, these controversies contribute to talking about this music on several levels.

The situation in the world music world regarding gender equality is very interesting. As in jazz music, until 30 years ago, women were predominantly singers. Especially if you look at the global picture, because a large part of the countries are still very patriarchal or women are not allowed to play for religious reasons.

The situation is changing in the world and in our country. Women with an instrument in their hand are no longer a rarity, but playing is still a mostly male task. The power of change is also shown at domestic world music festivals, where the role of women in the selection of programs is increasing, which only follows the trends in Asia, North America and Europe.

This international conference, which will be held in Belgrade on September 25, 2021, will be attended by local and foreign artists, as well as selectors and organizers of world music festivals, group managers from Serbia and the world, as well as journalists and critics who write about the world. music albums, festivals and concerts.

Certainly, it is important to note that the only world music magazine in the region is published in Serbia – Etnoumlje – whose lyrics are also published online on the portal of the World Music Association of Serbia, all edited by Marija Vitas, while numerous contributors write for the same magazine / portal. in greater numbers than men, which is different from the situation in Europe.

Conference participants, both guests from abroad and participants from Serbia, will present the situation and position of women on the world music scene in their countries and regions, through a brief historical overview and a detailed review of progress in the last 20 years. After that, with the help of the moderator of the debate, they will lead a discussion on how the position of women in world music can be improved. Useful examples will be drawn, which we can all use in future efforts to facilitate the understanding of this problem by institutions, the media and the general public. One of the topics will be institutional support for initiatives to improve the role of women in this polygenre.

The organizer will enable the Third Program of Radio Belgrade to record the entire conference and debate, in order to broadcast it later in its program. This will be an additional incentive to talk about this topic even after the conference.

The conference was made possible by the support of the Ministry of Culture and Information of the Republic of Serbia and Radio Belgrade 3.