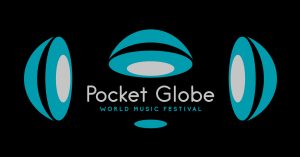 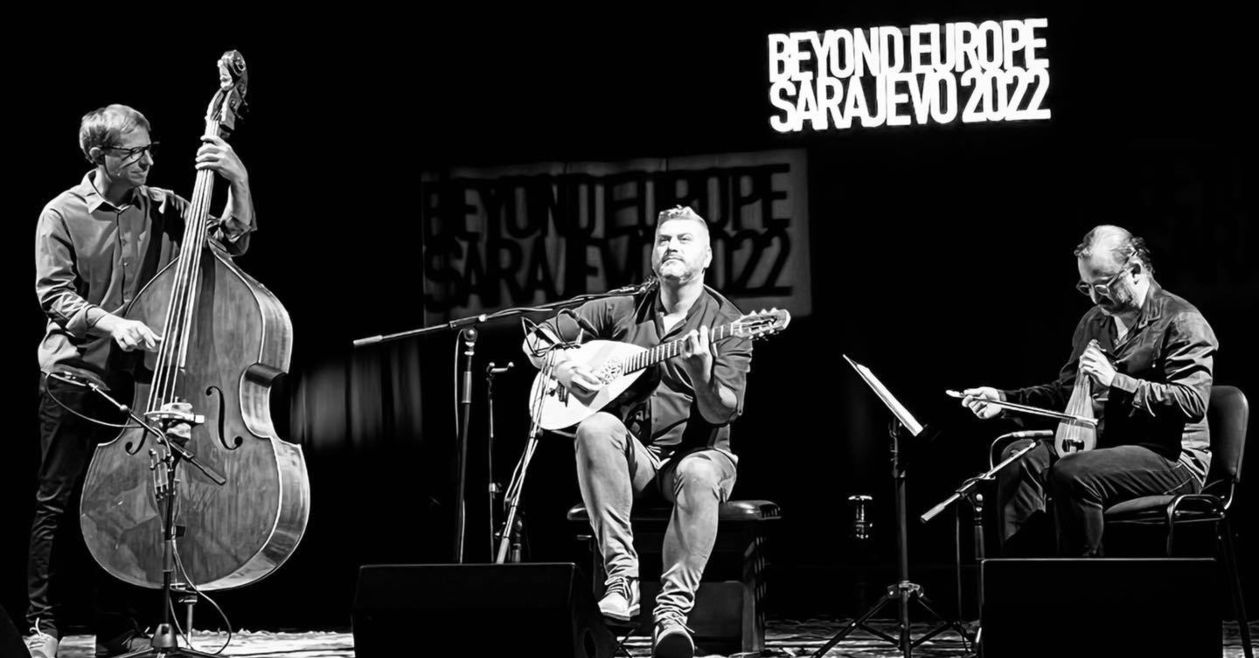 DAMIR IMAMOVIĆ (Sarajevo, 1978) is one of the most important representatives of today’s Sevdah scene in Bosnia and Herzegovina. He has released seven albums so far, some of them for prestigious world music labels such as The Glitterbeat Records (Dvojka, 2016) and Wrasse (Singer of Tales, 2020). Growing up in a family of Sevdah bards, Damir got to know the world of traditional music early on. He recorded his first album in 2006, followed by a series of performances in BiH and the region of the former Yugoslavia. Later, tours will take him to part of Europe, to China, USA, Mexico, Japan and India. He collaborates with numerous eminent musicians, and he also worked with producers such as Chris Eckman (Dvojka), and Joe Boyd and Andrea Goertler (Singer of Tales). Damir is the recipient of several local and international awards and recognitions. Among other things, he was declared the Best European Artist in the field of world music (Songlines Magazine, 2021), and his album Singer of Tales received the prestigious award of the German Association of Music Critics (2020). One of Damir Imamović’s current projects, Singer of Tales, features a trio that includes, in addition to Damir, the Istanbul master of Turkish classical music, Derya Türkan, and the outstanding Slovenian double bass player Žiga Golob. Türkan plays a classical Ottoman instrument, a three-stringed lyre called a kemenche, and is known for his collaborations with top artists. Golob is one of the most sought-after double bass players in the field of jazz and improvised music. He regularly collaborates with Tamara Obrovac, Matija Dedić and others. The concert in Novi Sad is the premiere performance of the Singer of Tales trio and the presentation of the eponymous project/album in Serbia. 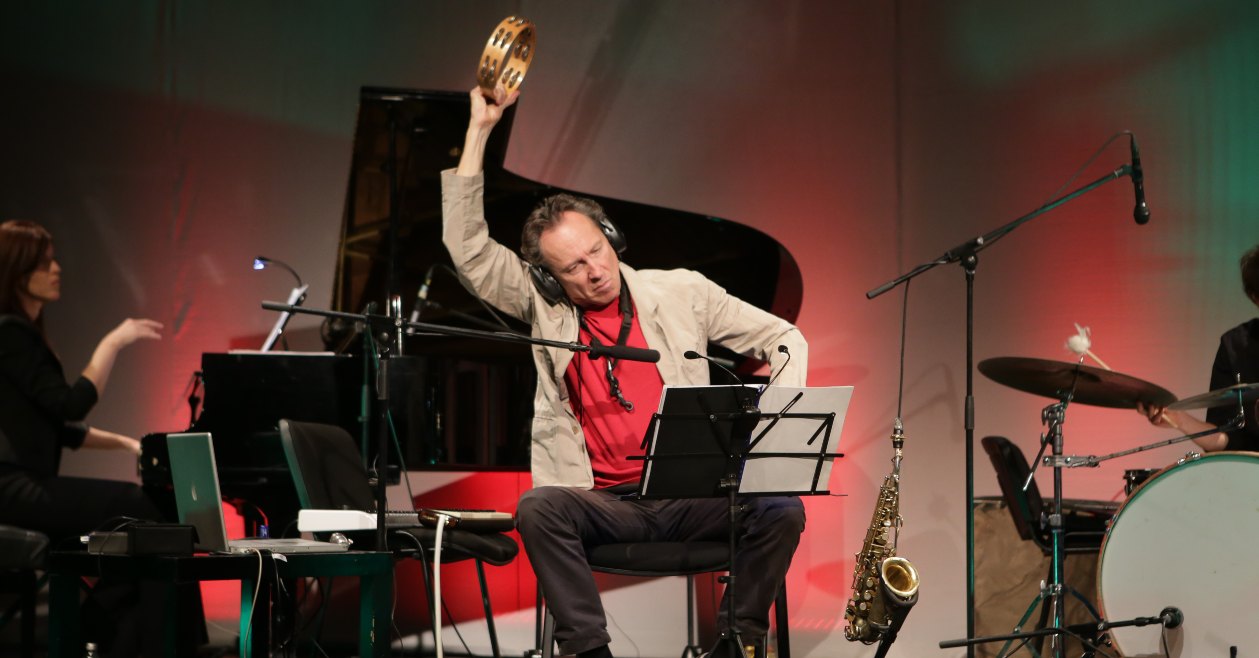 This concert program brings a number of compositions by Boris Kovač: works of chamber music and world-jazz-dance tracks written for film and theater, as well as one ballad by Lav Kovač, all arranged for an ensemble that had its premiere performance at the Opening Ceremony of the Novi Sad – The European Capital of Culture program, in the Serbian National Theatre, on January 13, 2022, in front of high-ranking dignitaries from the European Union and Serbia. The members of the ensemble are collaborators of Boris Kovač for several decades, and their performing creativity is deeply woven into his compositional expression. Boris Kovač is a composer, instrumentalist and multimedia artist. He writes music for chamber ensembles, which he usually rehearses and leads himself. Many of his projects were made for theater and film. His albums were five times on the lists of the best albums by the World Music Charts Europe panel, and the Songlines magazine included The Last Balkan Tango among the 50 most important albums of all time. He has been awarded several times for his work. The program of the BORIS KOVAČ NEW RITUAL ENSEMBLE at the Pocket Globe festival will be mainly based on, so to say, the lighter notes of this artist, and some of his most popular compositions will also be performed. Given that the performance of such a sextet is not easily achievable nowadays, the concert at the Pocket Globe represents a unique opportunity for the audience to witness the music of true masters of chamber music, who perform the rich and varied oeuvre of Boris Kovač with incomparable sensibility. In addition to Boris (soprano and alto saxophone, clarinet, melodion, vocals), the band consists of: Aleksandra Krčmar (violin), Lazar Novkov (accordion), Slobodanka Stević (piano, sampler), Siniša Mazalica (double bass) and Lav Kovač (drums, sampler ). Dima Jakovljević is in charge of sound design. 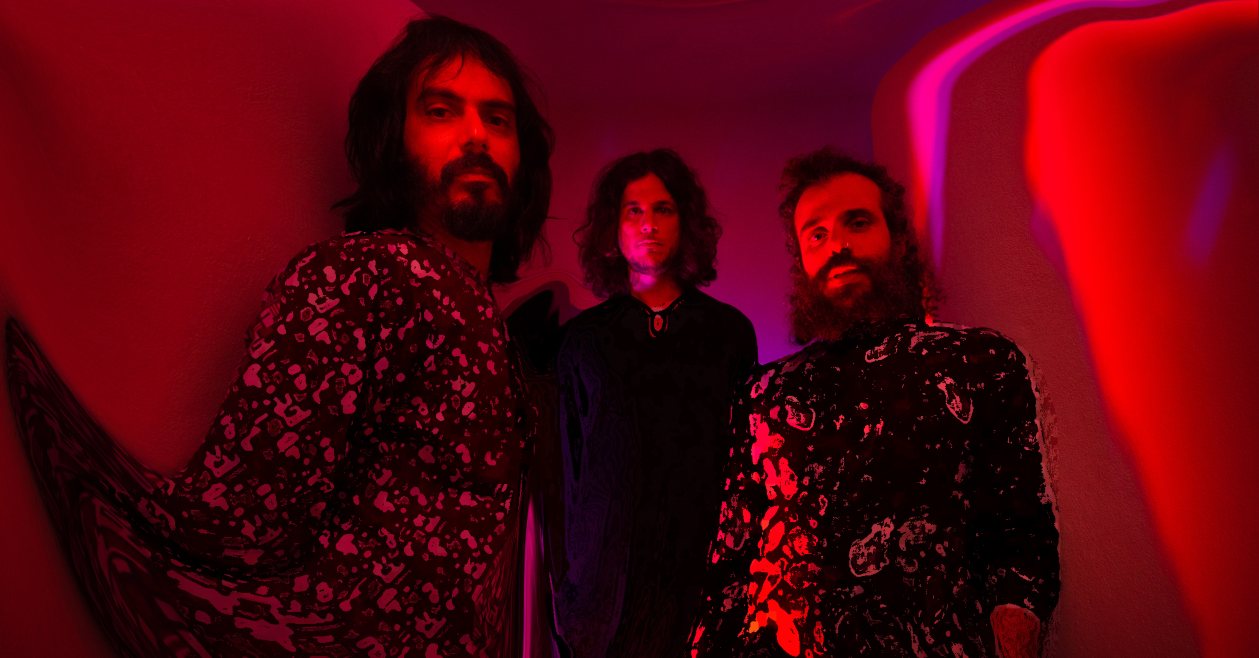 Hailing from the island of Cyprus, the multi-award-winning trio MONSIEUR DOUMANI has been impressing audiences worldwide for the last ten years or so with music strongly rooted in the Eastern Mediterranean. Their music has been extensively presented on worldwide media and they participated in the most celebrated festivals such as ESNS, WOMEX, WOMAD, Sziget, Trans Musicales, to name only a few. While their lineup may sound unusual for a three-piece (tzouras – small bouzouki, trombone, acoustic guitar) Monsieur Doumani are using electronics, effects and loop pedals to venture into a world that is refreshing and exciting. Their fourth album Pissourin released by the acclaimed Glitterbeat Records pushes their trademark Mediterranean sonics into a deep psychedelic and avant-folk direction. A danceable fever storm of stringed instruments, multi-layered singing and trombone-driven low end. Group members are: Antonis Antoniou (tzouras, vocals, electronics), Demetris Yiasemides (trombone, flute), and Andys Skordis (guitar, loops, percussion, vocals). The concert in Novi Sad will be their third performance in Serbia, after two concerts in Belgrade, at the Todo Mundo festival (2018) and at the Dim club (2019). 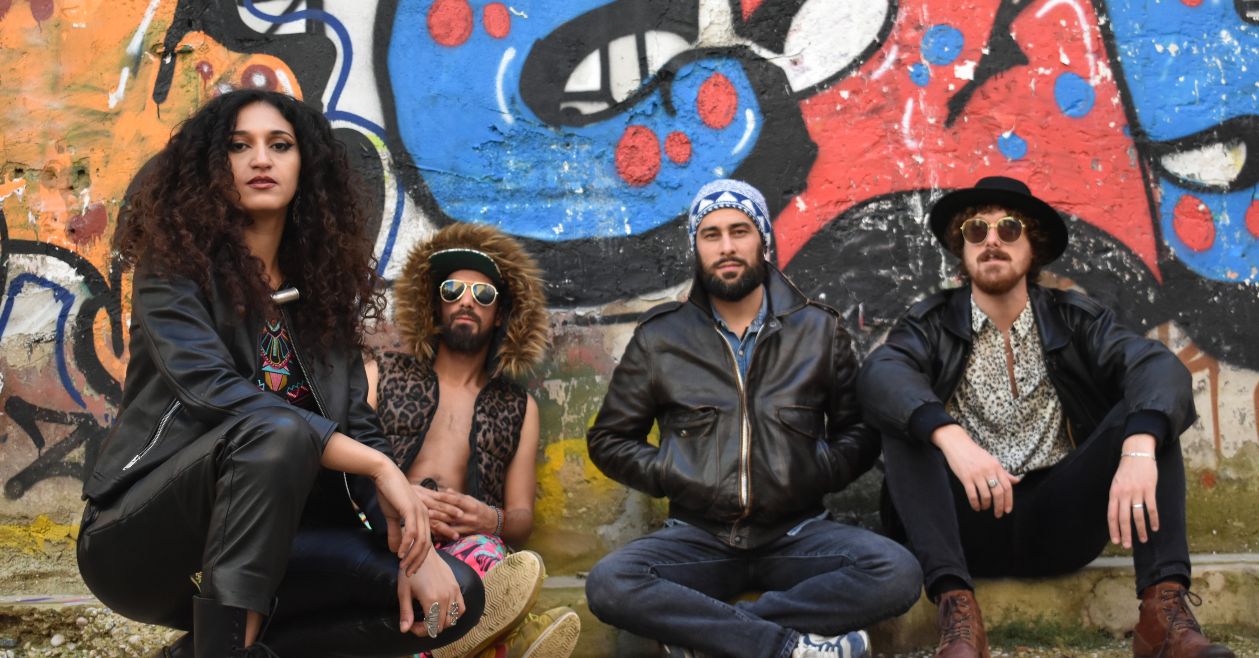 Created in Marrakech in 2018, BAB L’ BLUZ was born from the dream of propelling guembri (the Gnawa’s Guitar) on the international music scene of contemporary music. Moroccan-French power quartet Bab L’ Bluz are reclaiming the blues for North Africa. Fronted by an African-Moroccan woman in a traditionally male role, the band are devoted to a revolution in attitude which dovetails with Morocco’s ‘nayda’ youth movement – a new wave of artists and musicians taking their cues from local heritage, singing words of freedom in the Moroccan-Arabic dialect of darija. Ancient and current, funky and rhythmic, buoyed by Arabic lyrics, soaring vocals and bass-heavy grooves, the band’s debut album Nayda! seems to pulse from the heart of the Maghreb. Some describe them as Hot Psychedelic Gnawa Blues. Band members are: Yousra Mansour (lead vocals, awisha, percussions, guembri), Brice Bottin (guembri, guitar, percussions, backing vocals), Hafid Zouaoui (drums, backing vocals; In Novi Sad, he’ll be replaced by Moulay Brahim Terkemani), and Jérôme Bartolome (flute, percussion, back vocals). This is their premiere performance in Serbia. 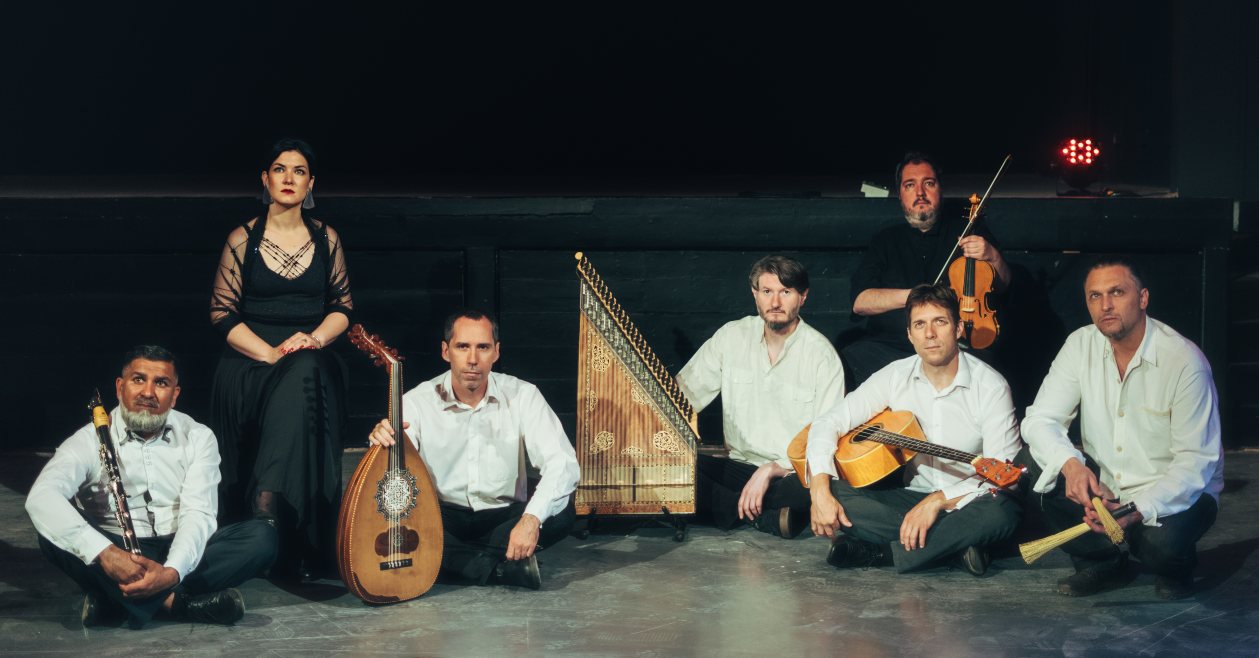 The group SHIRA UTFILA was founded in 2000 by Stefan Sablić – vocalist, oud player, arranger, composer, theater director and cantor. Stefan’s many interests, as well as numerous improvements in Serbia and Israel, contributed to and enabled him to provide a thorough and systematic approach to Sephardic music tradition, as well as to the general Jewish tradition and tradition of other nations who shared the historical, geographical and cultural landscape of the Balkans, the Mediterranean and the Middle East in the past centuries. Shira utfila brings together a multi-ethnic and multi-confessional ensemble that draws its inspiration from the diversity and richness of Judeo-Spanish, Ottoman-Turkish, Arabic and Balkan music traditions. The band has released nine albums – seven presenting secular music, and two albums of liturgical music. Being nostalgic, and so alive, evoking the wealth of the Sephardic heritage, the music of Shira utfila preserves the tradition at the same time creatively innovating, exploring its rich potentials and its cultural dialogue with other traditions and leaving it to the next generations as a gift and responsibility. The band toured a dozen countries and collaborated on various projects involving Sephardic music. Shira utfila passionately blends its knowledge of classical traditions and dedication to their preservation with a flair for improvisation and fusion. Its distinct sound brings a modern twist to an historical legacy. Along with Stefan, the band consists of: Branislava Podrumac (vocals), Aleksandar Jovanović Šljuka (piano), Filip Krumes (violin), Sinan Aćifović (clarinet), Srđan Đorđević (double bass) and Goran Milošević (percussion). 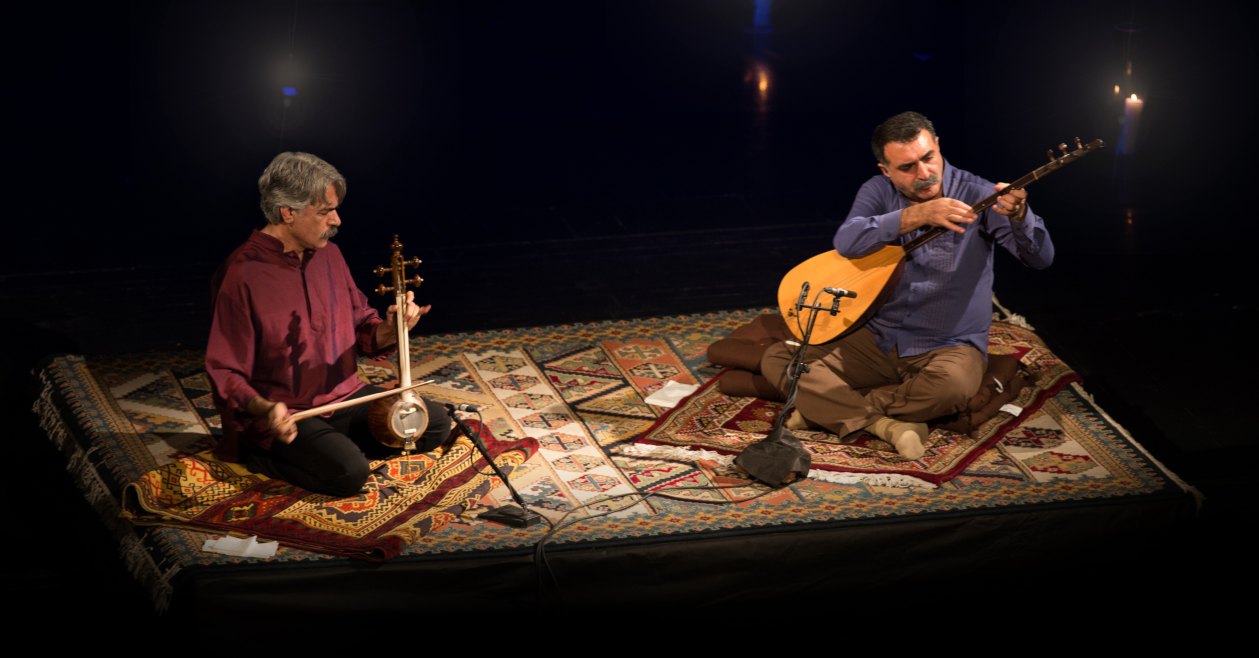 This concert brings together two virtuoso musicians steeped in the traditional music of their respective cultures – Persia (Iran) and Anatolia (Turkey). The classical music traditions of Persia and that of Ottoman Turkey have much in common. They share the ancient modal compositional system known as maqam, and improvisation plays a definitive role in performance. Likewise, the regional folk musics of these two countries have much in common: the similarity of some instruments, and the strumming techniques used on them, and the high keening vocal techniques so common to mountainous lands and used by singers throughout this vast area.  The music performed by these two musicians – Kayhan Kalhor on kamancheh (spike fiddle) and Erdal Erzincan on bağlama (lute) – while derived from ancient roots, is thoroughly modern. It is purely instrumental which is a considerable deviation from tradition in both cultures where the singer is considered pre-eminent. While traditionally sung poetry is an integral aspect of virtually all Middle Eastern music, in this case it is the sound of the instruments that delivers the poetry. This more abstract manner of conveying emotion and spirituality has always been present in Eastern music. In vocal music from the Arab world to Iran and India, accompanying instruments seek to imitate the nuances of the voice, often repeating melodic phrases or acting as bridges between stanzas. The music of KAYHAN KALHOR AND ERDAL ERZINCAN is intensely spiritual and emotional; it is like a prayer. It seeks to bring the listener into its trance-like realm by interweaving ecstatic rhythms with lush melodic phrases. Kayhan and Erdal often collaborate, and have released one album together so far: The Wind (ECM, 2006). The concert at the Pocket Globe festival is their premiere performance in Serbia.

More about lectures at the 1st „Pocket Globe” Festival